The origin story of Superman tells us that The Man of Steel was born Kal-El on the planet of Krypton and was sent to Earth as an infant by his scientist father, Jor-El, just before Krypton’s destruction. On Saturday, March 11, 14-year-old Kalel Langford of Centerton, Ark., celebrated his connection with DC Comics’ superhero by naming the 7.44-carat brown gem that he picked off the surface of the search field at Crater of Diamonds State Park “Superman’s Diamond.” 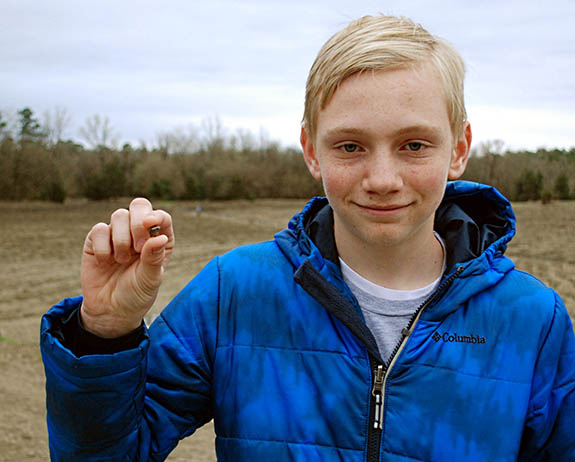 Superman’s Diamond is the seventh-largest diamond found at the Murfreesboro, Ark., park since 1972. About the size of a pinto bean, the gem exhibits a dark brown coffee color and has a frosty appearance. Its shape has been compared to that of a pillow or a kite. 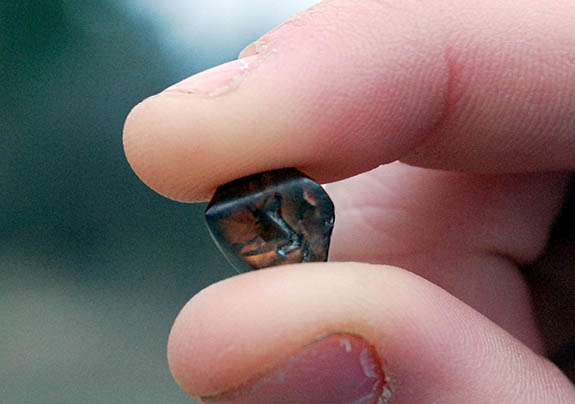 The teenager and his family, who live in the northern part of Arkansas near the Missouri border, made the 250-mile drive south to attend a baseball tournament, but extended their trip to fulfill the young Langford’s dream of visiting the only diamond site in the world where amateur prospectors get to keep what they find.

Langford paid $10 to enter “The Pig Pen,” the 37 1/2-acre plowed field that is actually the eroded surface of the eighth-largest, diamond-bearing deposit in the world. Within 30 minutes, he had spotted the shiny brown gem just a few inches from a stream of water near the park’s East Drain. The diamond was amidst other rocks that were about the same size, but Langford had a hunch that his stone was special. 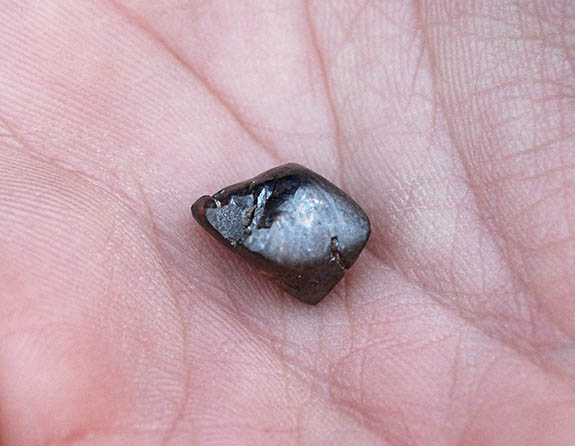 He picked up the gem and called to his dad, Craig Langford, who was searching nearby.

“Its color was so dark that we weren’t sure if it was a diamond,” said the dad, “but we knew we needed to have it looked at.”

Kalel and Craig Langford stopped by the Diamond Discovery Center to have their finds identified, and Kalel was shocked to learn he had found one of the biggest diamonds in the park’s history.

“Conditions were ideal for Kalel to find his diamond,” noted Park Interpreter Waymon Cox. “About an inch of rain fell on the plowed search area during the week. A heavy rain can uncover larger diamonds near the surface. Diamonds have a metallic-looking shine and are often easier to spot on top of the ground.”

Kalel’s parents didn’t realize the connection to the infant Superman when they named their son. Nevertheless, the lucky teenager chose to honor the superhero by naming his gem Superman’s Diamond. Kalel has no immediate plans to have the gem faceted and set into a piece of jewelry. For now, he plans to keep it as a souvenir.

Less than two years ago, Colorado resident Bobbie Oskarson found an 8.52-carat white diamond at the park. Her icicle-shaped gem, which she named “Esperanza,” was expertly cut into a 4.64-carat D-flawless “triolette” diamond, which will be offered for sale at Skinner’s fine jewelry auction in Boston tomorrow, March 21. It is expected to fetch between $100,000 and $150,000.

So far this year, 97 diamonds weighing a total of 26.84 carats have been registered at Crater of Diamonds State Park. The three most common diamond colors found at the park are white, brown and yellow, in that order. In total, more than 75,000 diamonds have been unearthed at the Crater of Diamonds since the first diamonds were found there in 1906 by John Huddleston, a farmer who owned the land long before it became an Arkansas State Park in 1972.

Credits: Photos courtesy of Arkansas Department of Parks and Tourism.